Rowing magazine’s April 2019 issue included a small article about self-coaching. Ironically, my husband had recently asked if it would be different going back to a masters rowing team after all this time. The question lingered, leading me to think about the dynamic of a rowing team vs. rowing solo.

A brief summary of my personal rowing history: like most, I learned to row with a rowing team. I learned during my final semester, which happened to be abroad in England. I loved it. Fast forward a few years, and I found a masters rowing team. I continued with a masters team for the next seven years. The first team had a maximum membership of 27; the second team had a fluctuating membership between 50 to 100 people. Then moved to a rowing black hole: Kentucky. I briefly drove over an hour one way to row with a team, but having a kid made that no longer possible. I became a rower out of water, training solo and mostly on the erg.

So what’s it like going from a team dynamic to training alone?

The benefit of rowing solo

At the Head of the Hooch, someone asked me if I found it challenging to go from the team to training alone. Answer: definitively, yes. When it comes to athletics, I am a team-driven person. I will always push harder, go further, and be better when I have someone else to compete against.

That said, over the last three years, I’ve come to like training alone. If I ever rejoin a team, I would continue to schedule days for personal training.

This experience taught me new ways to push myself. I jokingly created the #teamofone on Instagram to reflect this new dynamic. But really, I am a team of one. I have become my competition. 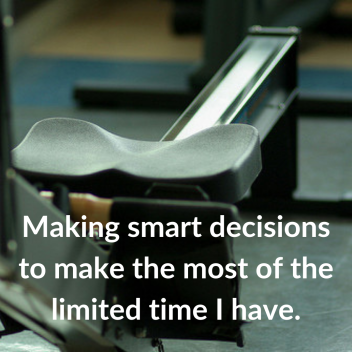 Since 2016, every workout I record the results. Not just the totals, but splits, drag factors, if I was sick, sore, or I had a really good day. And I’ve actively gone back and tried to beat my past workout times. There are no excuses. I know if I’m making progress because I have this track record of numbers.

In the end, aren’t we all trying to be our best selves? Doesn’t that mean we are our top competitor? I will never be an elite athlete, but I can be the best athlete my body allows.

I’ve learned more about crafting training plans. Training is complicated by a lack of access to water, having a young child, and continuing to work, even if only part-time.  I would love to work out twice a day, but it’s not realistic for my current lifestyle. The restraints forced me to learn about economy in training. This means smart decisions to make the most of the limited time that I have.

#3- Love/hate relationship with the erg

Since I have limited access to water, nearly all my training is on the ergometer. Training solo, seated on the machine, same square black screen and blank orange wall forced me to find ways to stay motivated.

Motivation is not always a success and not always easy, especially in the thick of laying down a cardio base and the workouts require over an hour on that sliding seat. But if you don’t tune into your body, you risk establishing bad habits. I’ve become better at erging, for what that’s worth.

Finally, there is that self-coaching aspect. I do believe there’s only so much coaching you can do yourself. Rowing solo means really listening to your body. This includes rowing eyes closed, capturing video, reading up on technique, and really turning in every time I practice to my technique.

The final proof is in the pudding. I have raced less since I started training again, but I’ve performed better. I PR’d at World Rowing Masters in the single despite only having raced in the 1x six times, and I rowed in two boats that medaled. I earned my first gold at the Head of the Hooch and I won at Cincinnati Indoor.

What I miss about teams

With a team, the infrastructure is there. It’s much more work to allows transport your boat to the rowing site. A row used to take two-and-half to three-hours of my morning; now it’s half-a-day.

I’ve been involved in other communities before, but there really is something special about the rowing community.  Even if I joined a triathlon squad or cycling team, I don’t imagine it’s the same kind of dynamic. In rowing, you’re moving together. Rowers trust in others to create something beautiful. Because that’s what rowing is: gliding over the water with symmetry, sky, and sweat. There’s nothing quite like it.

By nature, we’re a helpful bunch. Maybe it’s because of the boat dynamic: you’re only as strong as your weakest link. Most rowers I’ve met are giving people: of time, of money, of advice. Even the most competitive rowers get excited meeting another rower somewhere; we’re a unique fraternity of people.

#3-People who get the sport.

Look, with rowing, you get it or you don’t. I can’t adequately explain the sport until you do it. On countless occasions, I’ve shared some kind of training goal or workout stat with Alan only to have him go, “What does that mean?” Other rowers just get it. I miss hanging with people who understand the experience.

To be successful in a double, quad, or 8+, the squad must share the same goals. And when you have the same goals, there’s accountability. If you fail to meet those goals, you’re letting teammates down. I do miss having people to motivate me to be better.

I’m a competitor, even if I don’t always win. I like racing other people. They push me. It’s why I find head racing fun: my starts suck, but I get excited chasing people down.

Today, my training plans are always geared around some kind of endgame, a rowing goal. This year’s goal is to row at my first Head of the Charles. It’s more fun to share these goals with other people.

Rowing with others provides feedback on your rowing technique. That’s not something you can easily replicate when rowing by yourself. Even if the training session lacks a coach, there’s so much sensory data: slide rush, the boat set, the timing, the power application, the sounds of oarlocks. You learn ways to fix it.

That said, I think there are advantages to learning to train by yourself and to training with a team. I think it’s good to have both in your life. Unfortunately, I’m not in that space right now. And it will be interesting to see what it’s like when I finally am able to join a rowing program again.

I write; I row.
View all posts by camckenna →
This entry was posted in Home, Other, Struggles, Training, Triumphs and tagged goal, indoor rowing, rowing, rowing training, single scull. Bookmark the permalink.