Training Weekend for the Pair

“Spring training” came and went too fast. I escaped the Long Winter for a weekend water training in the 2- in Sarasota! I left with tender hands tender, a sunburn, and new thoughts on my training regime.

Things I learned this weekend:

Stroke and I managed five water sessions, four in the 2- and one in an 8+. Despite a prevailing crosswind all weekend, I’m happy to report that as bow, we hit nothing but waves and stayed upright. We improved each session, but that’s the point of practice. Stroke has the advantage of rowing on the water, whereas I’m a little rusty.

The intention for row #1 was to temper the hands, get accustomed to rowing together, and focus on technique. At this launch site, usually you can row somewhere that is sheltered, unless the wind is from the northeast. An onshore wind creates a washing machine around the launch site and churn the water even in Midnight Pass.  The positive is by rowing in Midnight Pass our pieces had a direct tail/head wind versus rowing in the crosswind. We safely made it to Midnight Pass,

Midnight Pass, first row in the 2-

and ironically, had the wind die for our first piece. And, since we’d rowed all the way to Midnight Pass, we jumped out to see the churning turquoise waters and the beach.

Fun note: It’s horseshoe crab season! One ran over my foot. I screamed and ran like a tourist. Stroke laughed.

Saturday, our hopes for calm waters were quickly dashed as the crosswind continued, but now from offshore. The first row was a “long row,” in this case a low-rate 12k. We opted to head south under the Blackburn Bridge because that section has more sheltered water than northbound. Near our turn around point, we ran into a friend in her 1x, and she invited us over to breakfast between our sessions. She treated us to much appreciated yummy oatmeal and berry smoothies.

An hour later, as we headed out for row #3, one coach running middle school practice was amazed we were heading out in the pair. The wind definitely had kicked up, and again we crossed to Midnight Pass for sheltered waters with reduced boat traffic. This session, we worked on starts and some rate work. The first two rows we’d been trending down to starboard at both the catch and release, but I moved a popper and that helped our set. That, and working on rowing “quiet” and a pulling through the release. The row back had some of the worst water of the whole weekend.

The afternoon we took off for a super fun birthday party with rowing buddies! I slept like a log that night.

Sunday morning, we joined in the regular team practice in a 8+, which was probably the best thing. The crosswind was still horrible, and the coach abandoned rowing north to stay in the relatively sheltered marine preserve.

Practice in the 8+ was probably the best thing for me at that point in the weekend. No steering worries, all my focus shifted to technique and fixing my release, having a strong core, and connecting with the water. I liked the workout, too. The coaches were seat racing in 8+s and I like being pushed. We lost the first piece, were neutral the second, and won the next two. The final race had horrible wake, and I smashed my thumb on the rigger when we took a crest. We had to stop twice, but still came out on top.

After practice ran late, we took a break and debated. The wind was still pretty strong offshore, but the water was relatively flat. I really wanted a 1k time in the 2-, so I said let’s do the 1k and come back in. If it hadn’t been so windy or my hands torn to bits, maybe we would’ve done more, but both of us were pretty beat by now.

I saw the big yacht in the channel, but thought we could outrun the wake. I was wrong. Around 300 meters we hit a massive roller coaster wave train. Stroke yelled to stop, and that was after dropping to half slide. Instead of re-doing, we rowed a 750m to finish. Stupid me was rushing and not realizing it because I was steering, looking for a random pontoon floating in the basin, until Stroke said something. As a result, our spilts were terrible, the run sucked, and the time atrocious. I am an idiot. I’ve got issues, but rushing usually isn’t one. 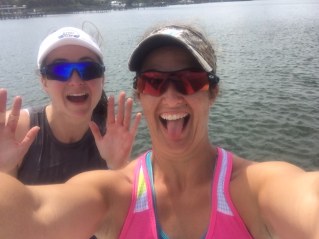 The end of a weekend of 2- rowing!

The good news is the last row was probably our most set.

Overall really splendid training weekend. Around 42k on the water, mostly in the 2-. I have technical points to work on and direction for my workouts. If only could keep my hands tough. I knew greatest obstacle (besides wind) would be my hands. Hanging your weight on the handle is tough when each stroke is painful.

Maybe winter will be over in Kentucky and I can start rowing more in the single!

I write; I row.
View all posts by camckenna →
This entry was posted in Home, Training and tagged motivation, rowing, training. Bookmark the permalink.