Duathlon. Taking two different athletic events and pairing them together into one challenge, usually in a run-bike-run format.

Except this is rowing. This unique event, the Duathlon at the Bend, is a 5k row followed by a 5k run.

The initial reaction of most people: “What?”

Enough rowers whine over knocking out 5k races. The thought of tackling a 5k run after that pales the average person. Sure–go compete in one of the toughest sports known to mankind, and then to top it off, go run some more.

But for some of us, our stomaches didn’t turn at the thought. Our ears perked up and said, “A rowing duathlon? That’s different! Sounds fun! Let’s go do it, even if our run will suck miserably!”

My night crew had hoped to suffer together as a quad, but thanks to work schedules and fear of the run, that turned into two doubles. Then two doubles became one double, myself and one of my fellow coaches at Scullers, who I’ll refer to as “Diva Hair” because she wakes up with perfect curls. Lucky girl.

It didn’t matter that only 5 non-Sarasota Crew (event sponsor) rowers signed up, or that we were the only double competing, or that I really shouldn’t be pushing my knee further than the few 2k runs recently attempted. The Rowing Duathlon is a challenge to be accomplished, and so we set forth to conquer.

We lacked the transportation for a double, and our cars couldn’t handle a roof rack anyway, so Diva Hair and I secured a boat from Crew. We agreed to used Sarasota County Rowing oars, and thought it we should wear Sarasota Scullers t-shirts while we were at it, to show rowing community unity. 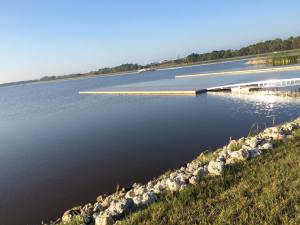 The day dawned cool and gorgeous, with the sun quickly warming up across the flat waters. The event organizers and coaches went out of their way to accommodate us by loaning the boat, putting it near our oars, and making sure we were taken care of. El Capitan came to support us in our row, as did Diva Hair’s family.

The organizers stressed warming up ahead of time, which I’d definitely do more of should I attempt next year. The clock starts right from the dock, so it’s launch and go! The head race course at Benderson is hard on starboard, and with this regatta we were hard for the first 800m through the recovery canal and under the bridges. We had to get used to the boat as we went, meaning our initial start was at an 18-19. Plus we average 140 lbs, and sat in a boat rated for a minimum of 160 lbs. Each push through the water was like rowing in wet sand.

Once we turned southbound down the 2k straightaway, I aimed to keep our stern pointed at the arch on the new Dillard’s at UTC. The boat wanted to run to starboard. To compensate, I tried short port strokes and long starboard. My left forearm began throbbing from the constant pressure.

We started warming up on the southbound 2k, inching the rate up by taking 10’s, until we reached a steady 22 in time for the next hard on starboard around the buoy and through the wave attenuator berm. Now heading east bound, I called another 10 before reaching our next buoy and turn.

Now I inched the rating up towards 26, knowing we were past halfway. I called, “we’ve been on the water 22 minutes now,” longer than we anticipated. The next turn was 300 meters up and not as angled as I remembered from the previous year’s head race. On this one, we held water on port to make the turn. I hate holding water–it jars the rhythm of the row. Across the lake, we became confused–at the race meeting we were told to put the last buoy on starboard, but there was a line of yellow buoys running up the course that make it appear to keep the pink navigation buoy on port. The ref boat confirmed that we had to cross the buoy line and row on the inside.

We rowed up at a 24, until I called us down–but too early. We picked it back up to finish into the dock. It sounded like someone called weigh enough, so we stopped momentarily before continuing. The crew rowers appeared to take the shell, so all we had to do was pop out and go.

You caught me! Our ankle bracelets.

As the final race, we started our run last. If you can call it a run. I opted to walk the first minute of each song and jog on for the rest. The running course began near the SANCA trailer, up over the west bridge, and around the bicycle path on the lake’s west side. Diva Hair and I stuck together, with me plodding along. When I was a runner, I usually skipped the water table, but on this day it was heaven. The H20 revived my pep. Unfortunately, it did not cure my knee which began throbbing as we turned towards home. I moved to running in the grass. I walked over the last two bridges, letting my fellow crazy person run ahead, and finished as the last person of the whole dua-thing, fist bump and all.

Even as my knee continues to protest my effort, I’m glad I did the duathlon. We celebrated our completion with a pretzel and ice-cream, relishing in the odd looks given to our sweaty Sarasota Sculler t-shirts. I can see that if the event manages to draw more rowers next year, it could be fun. It’s hard when you know you’re the last rowers on the course, both rowing and running, and that everyone is waiting for your slow butt to plod under the “FINISH” arch.

Next up is a more serious regatta: the Head of the Giblet.

I write; I row.
View all posts by camckenna →
This entry was posted in Racing, Struggles and tagged duathlon, regatta, rowing, sarasota. Bookmark the permalink.